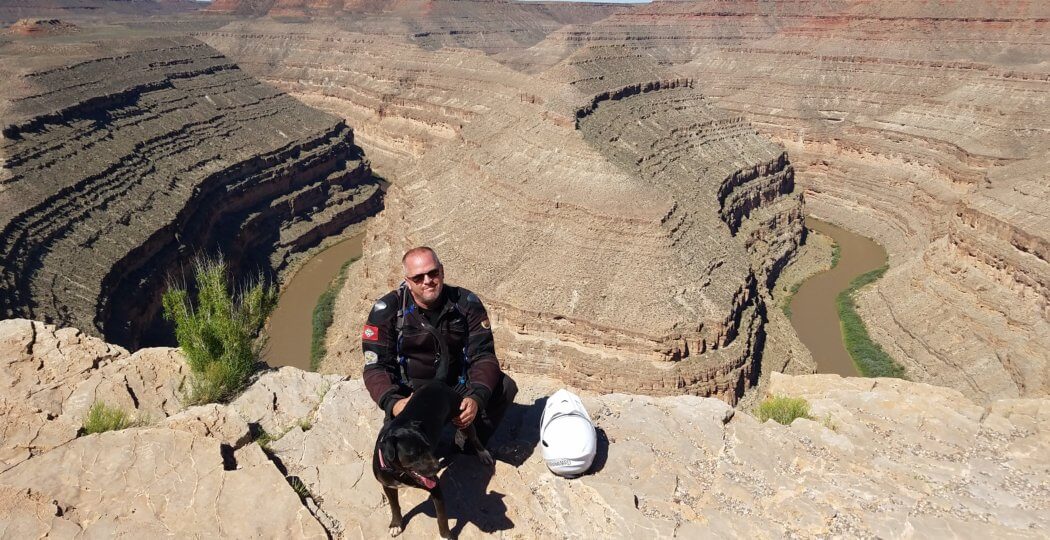 “Serious question… When you survive something that could very well have killed you, do you lose some of your tendency to fear new encounters with danger?”

This query was posted in response to a picture of me standing on rock ledge in Moab, Utah, and it made me think: is fear ever a good thing?

When Jo Ann was diagnosed with cancer some years ago, of course we feared the worse. One of the things that makes cancer such a cruel disease is that you never seem to get all of the bad news; the diagnosis, the mastectomy, the chemo, the hair loss, the radiation, the hysterectomy, and on and on, the fear of each procedure stacking on top of the previous. But then again, I guess that if we were to be hit with all the possibilities and ramifications at once, we might just have wanted to throw in the towel.

I remember coming home after Jo Ann’s operation to take care of the dogs; her procedure had been a success, but I recall sitting on the couch feeling as wrung out as an old warsh rag, (That translates to “wash cloth” for our friends in the north), and thinking “what was all the anguish about?”. All of the fretting and angst wasted, just to find out that it was going to be all right after all.

Then when I found Charlie; she appeared to be infected with sarcoptic mange and ingested with fleas, feet stained with poop, and obviously a least more than a little pit bull in her DNA. At the risk of affecting the rest of the inmates of the Casa, I feared the consequences of bringing such a dog home, but I couldn’t stand the thought of leaving her, so home she came. The mange? Hair loss due to malnutrition. Fleas and ticks? It was January, so the critters weren’t the issue they could have been. Pit Bull? It would appear that, regardless of what PETA would have you think, the breed is not the problem the “divide and conquer” media would have you believe it is.

Whether it’s health concerns, job issues, marital problems, or whatever else is troubling you, absolutely nothing is as bad as worrying about it.

But fear, or at least a certain amount of respect for the consequences, cannot be totally discounted when engaging in any activity. It’s this level of fear that makes the lineman wear his harness when climbing a telephone pole, and the motorcyclist wear the proper gear when going out for a ride. The day I don’t feel at least a twinge of fear when Charlie and I saddle up is the day I will quit saddling up entirely, as that means that I’ve gotten a bit too cavalier in my approach.

But then there’s Ecc 9:11, “chance happeneth to all men”; sometimes we’re blindsided by things that we could not have possibly be prepared for. This is when you find yourself laying flat on your back in the Ouachita mountains, pooping out your insides due to a ruptured colon and waiting on a helicopter that may or may not be en route; I did NOT foresee that eventuality when we headed out that morning. While recovering, I expected the inevitable question, “are you going to quit?”; what I didn’t expect was the relief on most faces when I said “heck, no!”. It made me realize how much we rely on the tribulations of others to give us hope when overcoming our own.

But we all have our limits, where mine stop in a certain area, your’s may just be starting. While standing on a precipe may terrify some, the fear of dementia might paralyze others, and all that any of us can do is prepare where we can, and have faith when we can’t. Whether the experience is good or not so good, whether you’re on the peak or in the valley, one thing is certain: