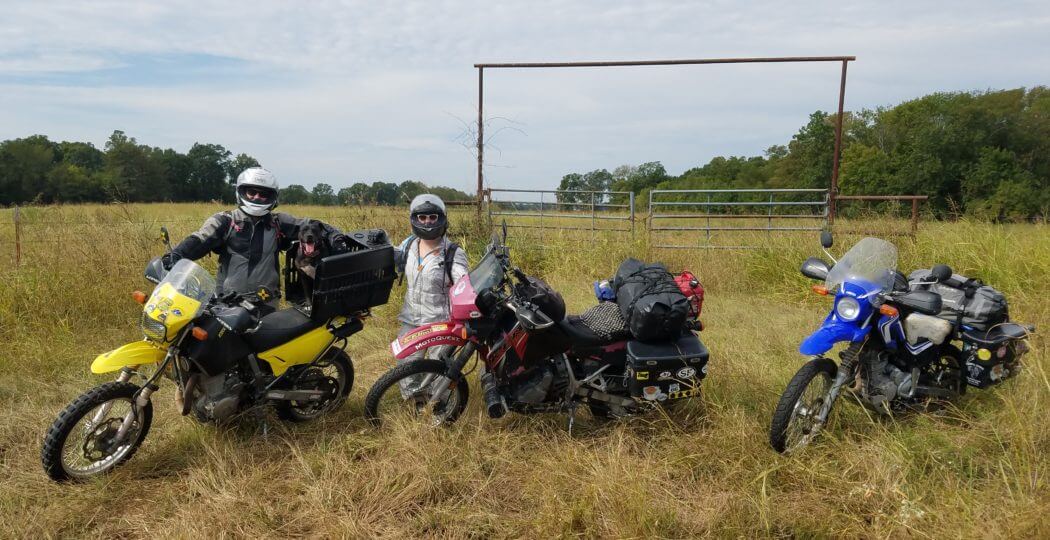 There are pros and cons to every situation; some would say that being temporarily unemployed in today’s economy would be the worst thing that could happen, but I haven’t seen dad this relaxed in, well, not since I’ve came to grace the Casa with my prescence. Things have a way of “working out”, and like my time in the crate, you look back and the negative feelings of those hard times are nothing but a hazy memory, almost like it happened to someone else.

After a week in Colorado and the subsequent time since the layoff, mom thinks that I’m getting even more fixated on dad; that may or may not be, but I’ll not argue, although I do know that it has opened up some unique opportunities. Dad received a text last week from a couple of cross country Canadian motorcycle riders in need of a place to pitch a tent and possibly do a load of wash; how could we say no? As it turns out, they were a young couple, and had been on the road for 52 days and 9000 miles, and still have a long way to go before arriving home in Ontario sometime next month.

Of particular note was the young lady; she is an accountant, and had no motorcycle experience before getting her license in June shortly before embarking on this epic journey. And theit route was not confined to pavement: as a matter of fact, they crossed some of the more difficult mountain passes in Colorado.

I guess she didn’t get the memo informing her that those passes were for experienced riders only; meditate on that the next time you think “oh, I could never do THAT!”

Mom fired up some BBQ ribs. Fletch, Zach, and Tara somehow just “happened” to show up, and a good time was had by all. One highlight was Fletch telling the story of how his cat ended up in the toilet mid stream (don’t ask).

The next morning we all saddled up and dad led them out of town via the spot where my crate was dropped, then we parted ways; as it was with the Ukraines, Faith and crew, and all the other inmates we encounter at the Casa and on the road, it leaves us with both a hollow spot and a fullness, if that makes any sense. This feeling was exacerbated by a stop to pay our respects at Stevie’s bridge before heading home to face Max’s accusatory glare; the hairy little goober doesn’t even like motorcycles, but still manages to make dad feel guilty every time.

Me? I have no problems with it whatsoever, as an overactive conscience is not something a queen is usually troubled with!