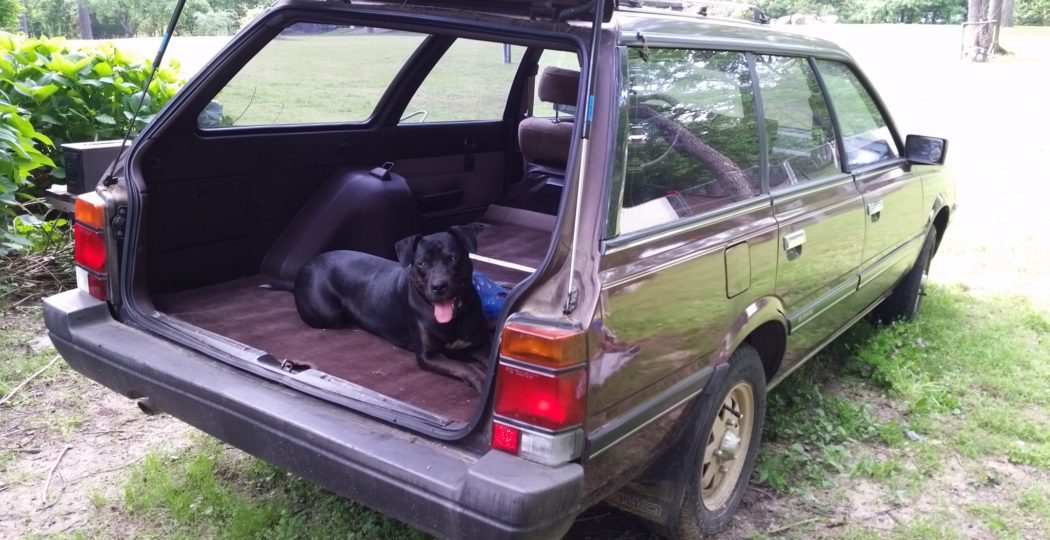 When dad found the Miss Ellie, he realized that he was taking a pretty big chance on a 30 year old car with a bad ticker, but he’s a pretty optimistic guy; some things work out due to careful planning(this is not the case where we’re concerned) and some things just “work out”.

We knew that the Subie probably needed a new engine,but the whole situation just seemed to fit my story. The decision came to take the plunge after dad found some YouTube videos of a stock Subaru GL climbing the trail to Clear Lake at 12,000′ in Colorado; he and Zach had climbed it on Enduro motorcycles, and then did it later with mom in a lifted Jeep (the trail, get your mind out of the gutter), so the thought of a old 4wd sedan on 13″ wheels sounded pretty appealing, to him, anyways. I realize that this makes absolutely no sense to most, if not all, but hey, this IS the Casa del Whackos we’re talking about.

Sourcing an engine has turned out to be quite the issue, as dad didn’t know that the EA82 is highly sought after for use in ultralight aircraft and low draft mud boats due to the characteristics of the engine; after extensive searching, the best deal he could find was 2500.00 for a remanufacture out in Colorado, although it killed him to be spending twice as much on an engine as he had spent on the car. He even went to an old biking buddy who is a Subaru wizard to question this logic, or lack thereof,and was surprised when Donnie was actually a follower of my page, and agreed that dad had no choice; Miss Ellie’s story is intertwined with mine, and it had to be done.

So dad cleared it with mom to use some tax refundage to fund the engine, actually had the debit card out to place the order, when he thought to make one last Google search before making the call; this time he found a used engine in Jacksonville, FL with only 85k miles on the clock. True, not the pristine reman’d engine out in Colorado, with the squeaky clean bill of health and the safe three year warranty, but with a 90 day warranty and less than a third of the cost, sometimes you just have to take a chance.

It’s due to arrive at Donnie’s shop on Monday, and now here comes the doubts and fears: what if it’s not “right”?
Well, what if?

Worry is interest paid on a note that’s not due; if it doesn’t work, we’ll just go a different route; sometimes you just have to have faith and take a chance. Personally, I think that it’s going to be just fine, and sometime this summer you’ll see her sitting high atop Ophir Pass in the Rockies, or deep in the desert in Moab, UT.

The best way to keep this story alive is to go walkabout; it’s always a party at the Casa, but I’ve been telling those stories for the last year and it’s time to shake it up. As the old girl seems to be happiest around 65-70 mph, we’ll be staying off of the interstate, relying instead on the blue highways on the map to ferry us west. The goal is to be in Crested Butte on the 4th of July; why, you ask?

There’s a group of scientists from the Rocky Mountain Biological Labaratory in Gothic that take time from their studies of the Alpine ecosystems to get liquored up to march in the annual Independence Day parade; sounds pretty mundane until you hear that they don’t just march, but run up and down the parade route wearing nothing but costumes made of skunk cabbage leaves, while blowing kazoos and trombones. If this sight framed again the backdrop of the Rockies isn’t a worthy reason to make a road trip, I’ll nibble my butt. Wait a minute, I already do that…

The goal is to do the trip like we always do, dirt cheap, camping where we can, which is just about anywhere out there if you’re just a bit resourceful. The purpose is twofold: to show that you don’t have to be wealthy or even smart to get “out”, you just have to do it; dad was 50 when he took his first walkabout, and it changed his life. The second reason is to take those that aren’t physically able (at this time, as there is always hope) like Darling Nikki, along for the ride; vicariously, of course, but with us in spirit.

How will we fund this trip? Don’t know, maybe the book will be done by then, but it doesn’t matter. What does matter is that I have been given a second chance at life, and I’m going to milk it to the last drop.