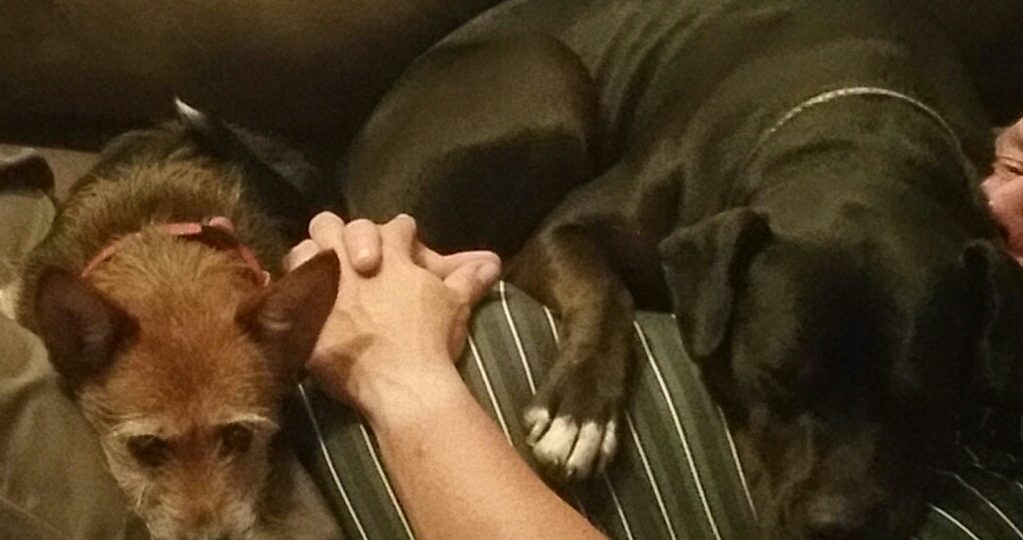 Some time back, we inmates got together and scribbled this tribute to Joe Walsh on the back of a Gravy Train bag; even though Stevie has left this mortal coil, it still feels good to include the janky-eyed girl.

My name is Charlie, was trapped in a crate
A victim of cruelty, indifference and hate two short guys on Hondas, arrived through the rain
Released me from bondage, terror and pain.

Now I’m queen of the Casa, Lady of the Bed
I hog the whole thing, and sleep like I’m dead
Dad does my bidding, that’s how it should be
I rupture his eardrums when I have to pee.

My name is Stevie, I lived in the sticks
Infested with vermin, chiggers and ticks
My left eye looks eastward,  the right one looks west
The others don’t matter, dad likes me the best.

I’m Mia the Nimble, the Red Spazcrobat
A younger version of Angel, not nearly as fat
I’m an ear licker, my tongue’s a Q tip
I’d rather not travel, as I get car car sick.

I’m Max E. Million, the one with the beard
My mustache and eyebrows universally feared
I’m wise beyond measure is what they convey
The ladies all love me, that’s all I can say.

Lucky we’re inmates after all we’ve been through
The inmates not the warden are running this zoo,
Life’s been good to us so farrrr…

Dad is the warden and hasn’t a clue
We’ve got him outwitted, there’s naught he can do
At home on the highway, tunes cranked on the deck
If he thinks we’re not going, he needs a brain check.