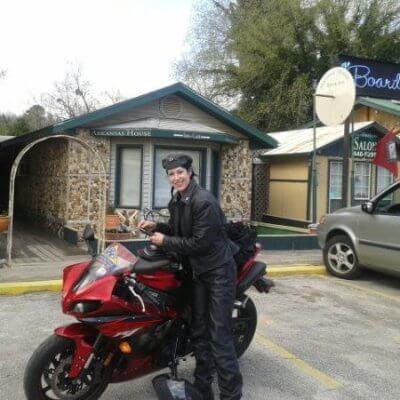 A few months back, dad lost a good friend and incredibly positive person to a freak non-vehicular accident. In this post, I’ll just call him “Kevin”, particularly because that just so happened to be his name. We found out just yesterday that the last text he sent to a mutual friend the night before his accident was:

“No worries, we still have tomorrow”; as it turned out, he didn’t.

Another friend, Alex, was a free spirited motorcycle rider. She was known for her hard charging riding style and always eclectic riding attire consisting of a unlikely combination of knee high boots, purple leggings, short skirts, long jet-black pigtails trailing behind her helmet as she wailed around the state on her Yamaha FZ1. But more importantly, she was constantly moving in other ways, with incessant involvement in fund raising for veterans affairs, Special Olympics, etc.. She had even assisted dad on occasions where roadside mechanical problems were an issue; she didn’t care if you rode a Harley, dual sport, a sport bike, whatever; she was just happy that you rode.

We were in Richards Honda yesterday and saw a Alex’s funeral program tacked to the bulletin board, and from that I found out that she had passed back in August. Even though we weren’t especially close, it was still like a punch in the gut. Dad was hesitant to ask the cause of passing, as every rider fears the death of another rider as much as he fears his own, because the survivor is left with the masses of knowing looks and “I told you so’s”.

We found out that, contrary to conventional wisdom based on her choice of screaming transportation, her death wasn’t motorcycle related at all, but due to aggressive ovarian cancer. Just like that, gone, at fifty seven years young.

I’ve ridden with her; I can’t help but think that if she had been able to choose the last exit ramp from her life’s freeway, she would have chosen to take her last breaths on the bike and not in one of the most dangerous methods of transportation known to mankind:

The hospital bed, the equivalent of sitting in a parked taxi with the meter running.

The world is a better place just knowing some people are in it, and Kevin and Alex were those type of people; not just because of how they lived life on their own terms, but most importantly, how they gave so unselfishly of themselves. And as you read these words, realize that you are this special as well, it’s just some of you just don’t know it yet.

So this is your mission, should you choose to accept it: get busy living. Reach outwards towards others, not inwards towards yourself, as what you send out, you get in return. Commit an act of kindness, not randomly, not once a day, but plan for it, every minute of every day. Even if you find yourself at life’s occasional stoplight, keep your right hand on the throttle and the bike in gear, like a coiled spring waiting on the perfect opportunity to be unleashed on yet another unsuspecting target of your willingness to take a chance and make a difference.

Now, if you’ll excuse me, I have some extreme flouncing to do before dad gets home. He doesn’t know it yet, but he’s taking me out on the bike so I can fulfill my need, the need for speed.

Chark diem; you know the drill…