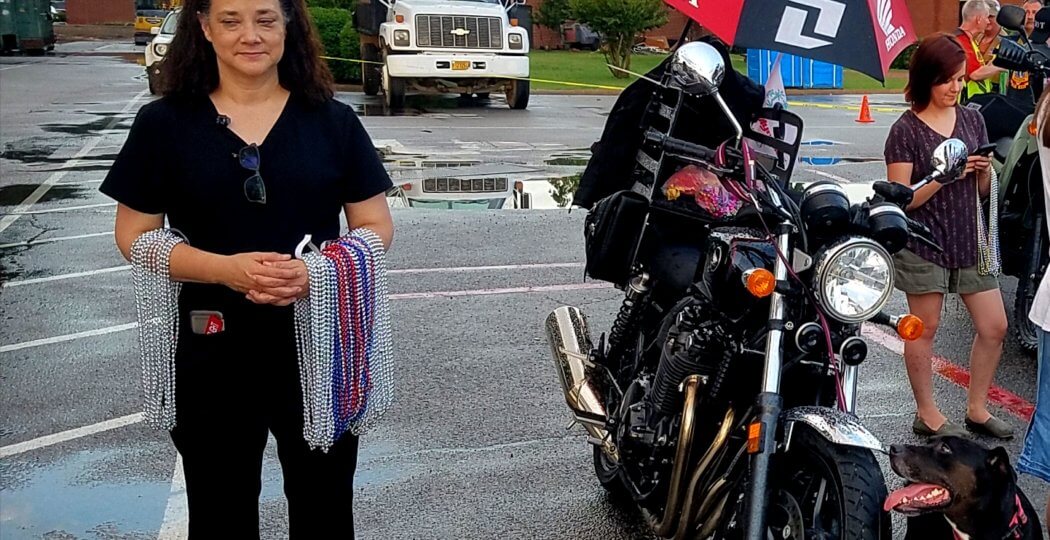 Last night was our 10th annual pilgrimage to the opening ceremonies of the Special Olympics, and Charlie’s first. In case you’re wondering what this entails, we roll into town en masse, creating a gauntlet of hundreds of motorcycles leading into the stadium. The athletes and their sponsors/coaches/families then line up in their respective chapters and file into the stadium while the riders rev their engines, high-fiving and encouraging the athletes all the way.

It’s not uncommon to see grown men turn away in tears, as the level of emotion in the air is almost palpable, so intense that many can’t handle it. So we don’t try to handle it, we choose to roll on it, immerse ourselves in it, snuffling enough up our respective nostrils to carry us forward to next year’s love fest.

It’s difficult to say who is encouraging who, but isn’t that what perfect love is all about?

Various factors have caused a drop in enthusiasm and attendance over the last couple of years, not the least of which is this crazy Arkansas weather, and yesterday was no different. As soon as the bikes arrived at the venue, the bottom dropped out of a previously clear blue sky, and the somewhat overzealous authorities herded us into the adjacent gymnasium “for our own safety”. Do what? I can cross the country solo on two wheels, but I need protected from a little rain? Please.

But what they did NOT anticipate was having a Charlie girl in attendance; it says a lot when one rowdy dog can cause more disturbance that a few hundred leathered-up bikers. Charlie knows when A: there’s a job to he done, but most importantly, B: when she has a captive audience, and in this case, she had both. She began her obligatory flouncing, and her earsplitting “CHARKs” reverberating through the halls were impossible to ignore.

Eventually, the rain cleared, but unfortunately, so did some of the less dedicated in attendance; good Lord, man, stick around! You’re already wet, and these kids are depending on us to get this thing amped up again!

As we watched our numbers dwindle at the same rate that the athletes were assembling for the parade into the stadium, we knew that the die hard among us were going to have to cowboy up and kick in hard to make up the deficit. The crew with which I roll does NOT flinch from adversity, so we were prepared to do whatever it took to make of the deficit. Even though my crazy mom and even crazier aunt showed up to join the festivities, it was still looking a bit bleak, comparatively speaking, to previous years.

But I had forgotten that we had a secret weapon in our arsenal: Vitamin C.

Charlie has never impressed me more. She transformed from the flouncing problematic, diva that she usually personifies to a regal Mother Teresa. She composed herself with dignity and compassion, somehow instinctively knowing when to stand completely still and when to lick the occasional face. To say that she was the belle of the ball is the understatement of the year. Then, when the last athlete made came through, she immediately reverted to her horking, thrashing, self-centered self; c’mon, dad, the excitement’s over here, it’s time to ride!

Then it was the sixty mile strafe through the misty night back to the Casa with Charlie’s head on my shoulder; I assure you that there was no need to dip into my melatonin stash before crawling into my 1/8th of the bed.

Usually I take a ton of pictures, but this time I’m going to have to rely on the generosity of others to post theirs on this page, as I was a bit preoccupado, as you can imagine.

“As ye do unto the least of these, do ye even so to Me”… but who are we to judge who is the least? I don’t know about you, but after an encounter like last night, I feel pretty humbled.