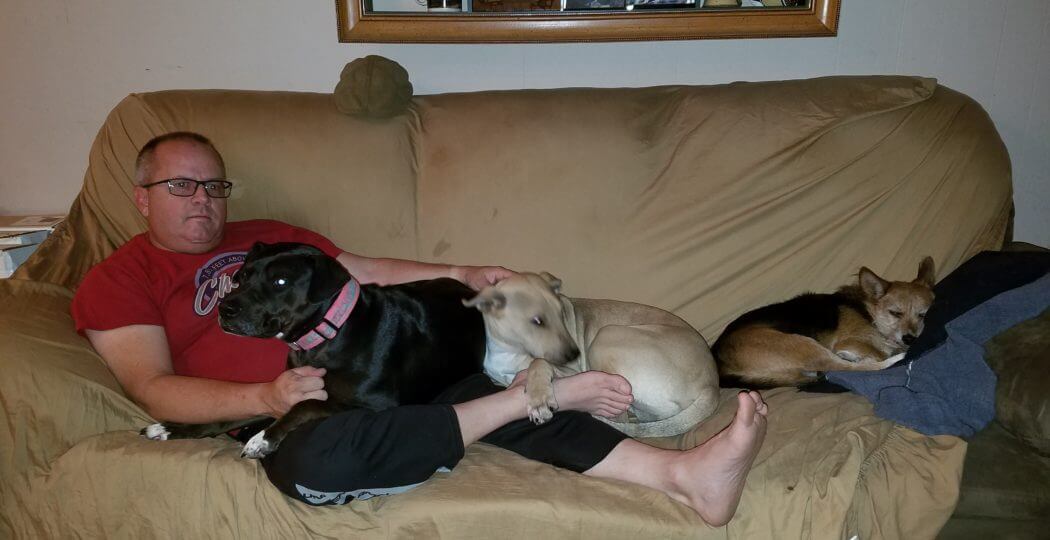 Max here…Everything at the Casa is about sharing, as difficult as it may be; here I am, chilling with dad when who should bust down the bedroom door but the two most obnoxious dogs on the planet: Mia the Spazcrobat and Charlie the Elemental Force of Nature. Nothing can upset my meditation like these two; how I long for the days when it was just dad and I!

For a time, I was dad’s soul dog, as Uki and Beebe had crossed the bridge and the red dogs hung out with mom; during that era, numerous other dogs passed through the portals of the Casa, but I was the one that stayed. Dad would even sneak me along on extended business trips; I would assume my command post on the armrest of the Limpala and away we would go. On weekend hiking trips, Zach would also be in attendance, which suited me just fine, as then I had not just one but two sources of indentured servitude, not to mention Tic Tacs(my favorite snack).

Then here comes Charlie, then Stevie, Beau, Mia, Clydesdale, etc, etc; now what was once solitary adventures are more like the Allied invasion of Normandy. Dad has to carefully choose his words, as a careless slip of the tongue (Go?) results in a maelstrom of dogs demanding to do that very thing; the level of excitement would make one think we were going to Disney World instead of just down the street to the Dollar Store. Now every piece of bacon that dad and I once shared in silent communion must be carefully divided amongst whatever dogs are in attendance of the Blessed Sacrament, lest anyone feel slighted.

And pity the fool alerts the mob of impending victuals with the Rattling Of The Plastic, or that lets a spoon clank against any empty bowl, signifying an intercept is necessary enroute to the dishwasher.

Now with the not-so-temporary addition of Clyde to the roster, Charlie is getting a little taste of attention that is sometimes spread a bit too thinly across the bread of life. Thankfully, he has expressed no interest in going with us when we take Miss Ellie for a spin, but more than makes up for this with his incessant demand to hog the remote. Where Charlie prefers Animal Planet, Clyde has shown a remarkable affinity for AMC, but we ALL like the the Food Channel; imagine that!

Speaking of sharing, the 2017 calendars are now available at our cost, as you are family, and we’ve always felt a bit odd profiting from family. We want everyone that wants one to have one, but feel free to donate a little extra if you care to, as things are a little tighter at the Casa this year than in years past. Once again, the month of December has been dedicated to the passing of Stevie Mae; what a dog she was.

Gary has also added some extra colors to the tshirt lineup, and we will be offering free shipping from the Charlie Bravo store for Black Friday and Cyber Monday. Avoid the bedlam at the malls, stay home, or better yet, get out, waaaaay out; use the day to take your dogs somewhere remote instead of contributing to the feeding frenzy.