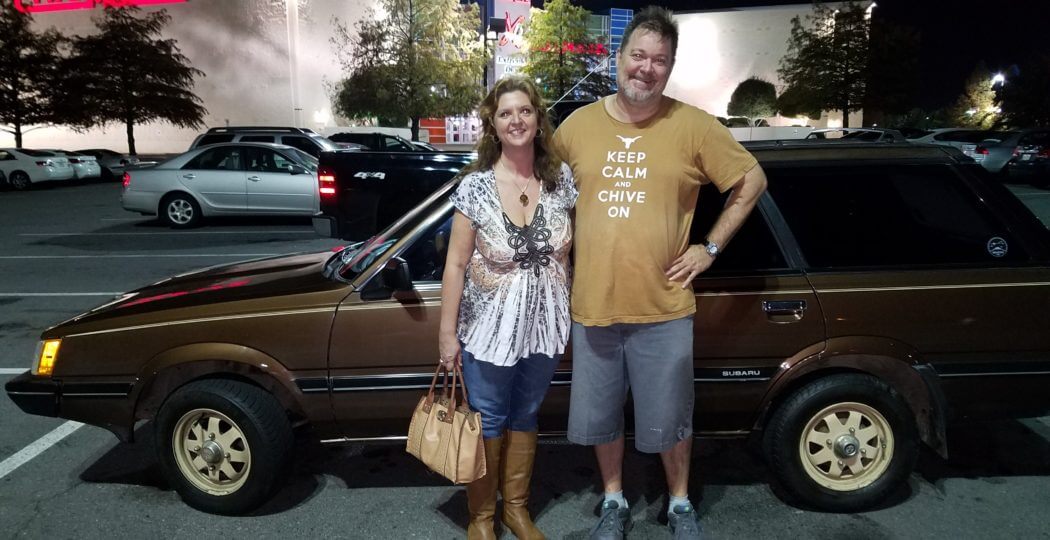 Miss Ellie here; dad and I left Charlie, mom, and the rest of the inmates at the Casa, and went on a little “date night”. The local multiplex had a one night showing of “Rush: Time Stand Still”, a documentary featuring the forty year career and retirement of the iconic Canadian rock band. As he was going solo, Dad started to take the bike, but I was having none of that nonsense; what could be more appropriate than a fifty year old guy going to see a forty year old band, driving a thirty year old car?

Much was made in the movie of the fans dedication bordering on fanaticism, and the point was made the the it was never the high school quarterback that was the Rush fan back in the day, but usually the band geek, the science nerd, the ones that didnt quite “fit in”. I never thought of it that way, but I get it; I too have always felt that I was also always on the outside edges of the mainstream, four wheel drive but not a truck, not real fast but still a car. But unlike those “cool” cars of yesteryear that are moldering in salvage yards around the country, I’m still here.

It was a bit sobering to see the concert footage, with hands that once held lighters aloft now wrinkled and wearing wedding bands and holding cell phones; where has time gone? And the guys in the band, once larger than life on the neon stage, now dealing with creaky joints just like the rest of us. But, like my noisy lifters, the clock keeps ticking away, and so can we. When my original dad died and I was put out to pasture, I thought life as I knew it was over, and I was right, but change is not always a bad thing; I’m now more active than I ever was, doing things I had never even considered in the past.

Neil Peart, the drummer for the band, no doubt thought his life was over when he suffered the loss of both his wife and daughter. He found solace in the open road when his second wife bought him a dual sport motorcycle, and for the last few years has been riding that motorcycle from show to show experiencing the countryside instead of traveling by bus or plane. As hurtful as those deaths no doubt were, he eventually was able to use it as a springboard to a different phase of his life. On a side note, the movie shows him poring over maps, planning his route for the next day, and you can barely hear him murmur:

“What’s the most excellent thing I can do today?”

Basking in the flourescent hum of the parking lot lights, I felt somewhat vindicated, as when dad exited the theatre, a guy was checking me out; me, a thirty year old car amongst an emptying sea of more modern hardware. Thirty years: that’s like seventy years to a human, but I’m just getting started. Sure, I take a bit more care, and dad and Charlie’s rambunctious ways take a toll on my interior, but if you’re not green and growing, you’re probably ripe and rotting, and I’m not ready for the scrap yard just yet.

I’m going to love this next phase of my life!