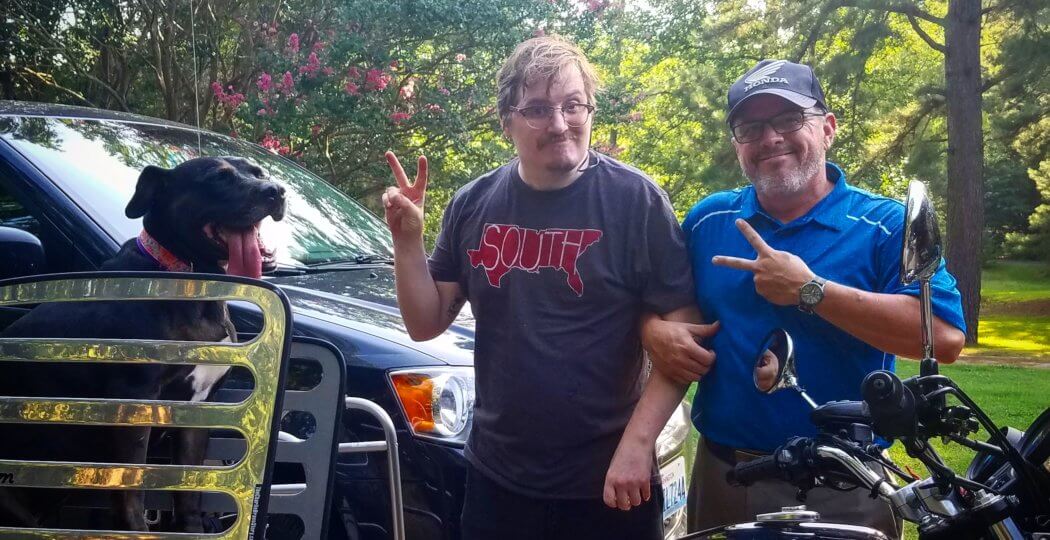 The sun is rising over the dewy grass of the Casa del Whackos. It’s going to heat up to be another of those oppressive July days that points to the assurance of even more of the same in August, but for now, the incessant buzz of hummingbird wings seems to be keeping the temperatures beat into submission.

Then the peace is rent in twain as Charlie, Claire and Ajax cease their frolicking just long enough to realize that the I’m standing on the back porch, minding my own business; this will NOT do. In a fit of gleeful abandon, they come charging in from the back forty, ears popping and slobber slinging, and any tranquility currently being experienced is quickly left in tatters.

They say that there is no rest for the wicked; I just didn’t know that I was this wicked.

This weekend marked an unforeseen milestone at the Casa; the book is finished and awaiting the final proofs to arrive from the printer, hopefully on Tuesday. But that’s not the real milestone; Trevor Ware unexpectedly showed up for a visit, quite remarkable, considering that he now lives 2635 miles away. This was especially odd, as the book has been dedicated him for his contribution to the overall story, but let’s go back a bit, shall we?

When I turned fifty, I was like most that hit a certain imaginary milestone, no matter what it may be; is this all there is to it? But then again, I felt guilty and ungrateful for feeling this way, as I had already had some great adventures, raised a pair of fantastic kids, stood by mom in her successful battle with cancer, but most importantly, had gotten a taste for the joy of a life spent in service to others. But still, I always felt like there was something else “out there”, tickling the edges of my consciousness, and time, she was awastin’.

Then I encountered Trevor, and his tragic story inexplicably consumed my life for the next two years, with so many completely insane “coincidences” prompted Trev’s mom, Pam, to tell me: “you HAVE to put this into a book”. But how does one accomplish this, especially with no writing experience whatsoever, writing of one’s experiences from the first person perspective without appearing to be a narcissistic knucklehead?

Then I had my freak motorcycle incident that left me flat on my back with a septic soup pot for an abdominal cavity and shiny new colostomy bag for a constant companion. One of the first phone calls I received while still reeling from the indignities of the wonders of modern medicine of the surgery was from Pam:

“This is your chance to write that book”.

It was a short time later when the depression had hit me like a ton of bricks; mom was still repacking the incision in my gut twice a day, I was walking around in perpetual terror that my buddy The Bag was going to spring a leak or some other horribly embarrassing prank on me, bills were piling up and the walls were closing in. So what do you do? Well, I dont know about you, but I go for a ride. It was on this ride that Zach and I found Charlie, and we subsequently found our voice.

The first book did a much better job of relating the story of Trevor and his unknowing involvement in Charlie’s saga, to the point that I’m thinking of pulling it from print and reworking it a bit for reissue; his story deserves this, is it as incredible as any I’ve ever heard, and somehow remains intertwined with Charlie’s to this day.

So imagine the inestimable honor of being able to personally read to him the dedication in the front of the new book before anyone else has even seen it. The doctors said that he would never walk again, but in some ways he’s like Charlie, or Charlie like him; not just another “normal” actor in this play called life, but an elemental force of nature with all of the accompanying positives and negatives of such a force.
Just tell them they can’t, and stand back and watch them do.

Pam told me yesterday that Trevor fought daily for months to come out of the wheelchair, only to express the same determination regarding his walker; moving from handhold to handhold around the house. Does he frequently fall? Of course; dont we all? As a matter of fact, he took quite the tumble during his visit at the Casa this weekend, but then it was up and at ’em again, let’s go outside and talk motorcycles and about those things that connect and inspire, not that divide and conquer.

And you can as well, as we all carry such power within us; regardless of where you are right now physically, financially, mentally, emotionally, spiritually, it doesn’t matter;you can always push a bit farther today than you did yesterday.

Someday, Trev, we’ll have you back on the road.

More of the story here,,